Tackling Homes and Hunger in Orlando 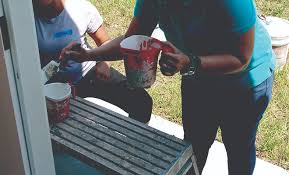 Tackling Homes and Hunger in Orlando

By Brion Hurley and Greg Weisenborn

For the seventh year in a row, the board of the Sustainable Development Division organized a volunteer service project with a local nonproﬁt prior to the start of the IISE Annual Conference & Expo held May 18-21 in Orlando, Florida.

With the rising popularity of this event, we added a second nonproﬁt this year to handle the demand. In previous years, we had to turn away potential volunteers.

The ﬁrst organization selected was Habitat for Humanity due to our connections from the 2018 event. However, the Re-Store had been closed down since last year, so we decided to help out the home building side of Habitat.

The second organization selected was Rise Against Hunger. We learned about it through its submission for the Excellence in Sustainable Development Award, and it was named the in-augural winner in 2019. You can read more about their accomplishments and recognition in the August issue of ISE or at link.iise.org/SustainableAward.

The purpose of our volunteering is not just to help out the organization but also to provide feedback afterward on the process improvement opportunities we observed in order to improve their operations and volunteer experience.

Volunteers left the hotel on Saturday morning, May 18, headed for Apopka, Florida, an Orlando suburb. Within a large metro area such as Orlando, there are multiple Habitat for Humanity afﬁliates. One problem encountered immediately was some confusion about the job site location. Different Habitat afﬁliates might be operating in the same geographic region, and our volunteer team originally stopped at the wrong house run by a different afﬁliate.

With our division’s ongoing engagements with Habitat at different IISE Annual Conference locations, we continue to learn more about the nationwide organization. Different Habitat afﬁliates focus on different regional activities, playing to their strengths and regional needs and opportunities.

The afﬁliate we worked with prefers to focus on building large 30 to 50 house development initiatives. They operate with full-time construction professionals leading teams of volunteers. With the large number of volunteers, they have personnel dedicated to volunteer experience and coordination.

New homeowners must work about 200 volunteer hours as part of their contribution to purchasing a new Habitat home. The ﬁnancial model for each new homeowner is complex with a variety of sources required. We worked side-by-side with future homeowners and their friends, as well as with college and high-school students who had service-hours goals as part of either their personal dedication or requirements for academic programs. For example, Florida’s Bright Futures scholarship program requires that high school students complete service hours.

On site, safety was key. The site manager “trained us up” on job site safety basics, including awareness of the heat and humidity in Orlando. He quickly identiﬁed individual volunteers’ personal abilities, strengths and interests.

Our team worked on two different houses on the same block. One house was prepping for ﬁnal inspection and “closing” at the end of the weekend, and both were at the “ﬁnishing” stage, so much of our work was done indoors. Hopefully, our innate ISE mindset (pokayoke, conservation of resources, “measure-twice-cut-once”) rubbed off on the students who worked side-by-side with us. We had a couple of good conversations with student who showed some polite interest in our willingness to share information about industrial engineering.

Jason Haulbrook greeted us when we arrived with our over-sized bus and gave us a quick tour of the space at Rise Against Hunger. Immediately, we were impressed with the organiza-tion and cleanliness. There was clear evidence of their work-place organization activities, which was a signiﬁcant part of their documented improvements.

The team split into two groups: One group to wash the sup-plies from a recent event, another to help get the dried supplies organized for an upcoming event in Jacksonville.

There were three stations and three sinks for each station. We staffed one person at each sink with a fourth person to put the utensils and supplies away on the rack. After observing the last step, we made some changes to how we intended to stack the items on the drying rack.

One of our process requirements was to leave the dishes in the ﬁnal sink to rinse for at least 15 seconds. Without a clock or alarm to control that, we set up a phone with a timer and con-trolled the workﬂow. If we overloaded the last sink station, it might be confusing to know which items were in there a long time and which ones were just added. So, we set up a simple kanban system to have one set of dishes being dried, one set sitting in the sink and one ready to be added. That station was usually the bottleneck, so we controlled the workﬂow at that stage. This helped us avoid mixing up the dishes and ensured the dishes received enough soaking time.

The second group at Rise Against Hunger ﬁnished their put-away work early, so they got started on adding labels to empty meal packages. Each package needs to be closely controlled in case there is food contamination or a bad batch of supplies.

Because we can’t avoid collecting data, one question we tried to answer was which method of applying the labels would be more efﬁcient: using a rubber band and ﬂipping through the stack or ﬂipping over each package upon completion.

.However, efﬁciency is not the most important metric for a nonproﬁt. It also wants to balance efﬁciency with the volunteer experience. In our example above, if the faster meth-od was less enjoyable for volunteers, they would opt for the slower method every time.

We provided about 20 improvement ideas to Jason based on our experience as a volunteer that day and our process efﬁciency experience at work.

At the end of the day, we tested the meal. It was good and nutritious, if a little bland in ﬂavor, but Jason explained that was on purpose: Those receiving the meals may not have the stomach to handle anything too ﬂavorful or spicy.

To learn more about Rise Against Hunger, visit www.rise againsthunger.org.

If you’d like to join us at our next volunteer service project, it will be in New Orleans on May 30, 2020. We are currently working to ﬁnd a nonproﬁt organization in the area that would like our assistance and recommendations. Con-tact Brion Hurley at brion@biz-pi.com if you would like to be involved or know an organization we can connect with. Check the IISE Annual Conference website for announcements in February or March.