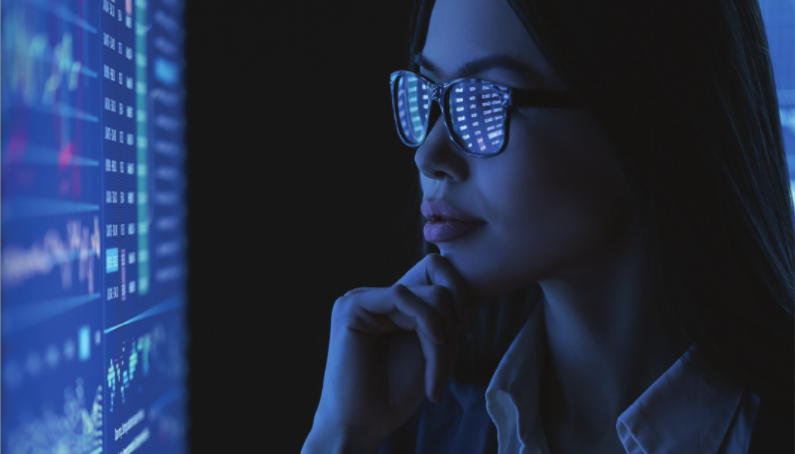 Various statistical packages are available to conduct analysis and learn insights that would not be evident simply by looking at data. However, a lot can be achieved by using basic statistics in Excel.

To illustrate, let us say you have a ma-chine that is ﬁlling cereal boxes. The tar-get for the weight of the cereal in the box is 1,000 grams. We want to ensure we do not send a box with less than a full kilo-gram of cereal, and due to limitations of the machine, we have decided to allow a plus tolerance of 50 grams. Hence, the operating speciﬁcation for the machine is 1,025 grams +/- 25 grams.

Say each cereal box ﬁlling machine produces 5,000 boxes per day and the cost of goods for the cereal is $1.50 per box or $1.50/1,000 = $0.0015 per gram. A new vendor says her machine can control the variation in the ﬁlling machine twice as effectively. We would like to evaluate this claim and estimate how much savings can result from the new machine. 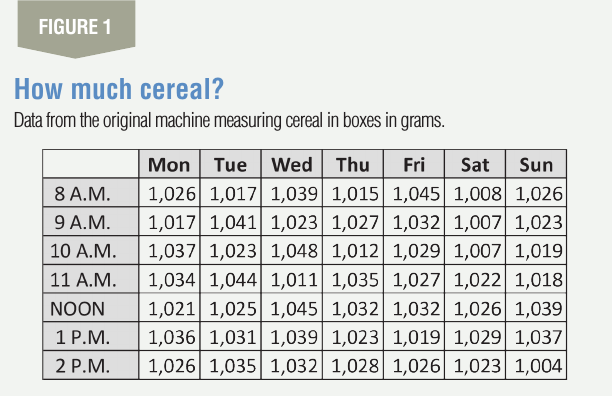 To begin the analysis, a good ﬁrst place would be to ﬁrst look at how well the present machine is performing. Figure 1 shows data for seven days of continuous running.

Before applying the properties of the normal distribution to the data, it is necessary to check whether the machine is producing normal data. One way to do this is to plot a histogram with an appropriate bin size in Excel and see if the resulting graph is a bell-shaped curve. In a normal distribution, most data points are concentrated near the average and show an equal tapering on both sides forming a bell-shaped curve. To do this, we use the histogram function in Excel under Data and Data Analysis. When the function is activated, select the data array with all data structured as a column and a bin array. We have created the bin array with a bin size of 5 grams, which should give us a histogram with between 10 to 15 bins. 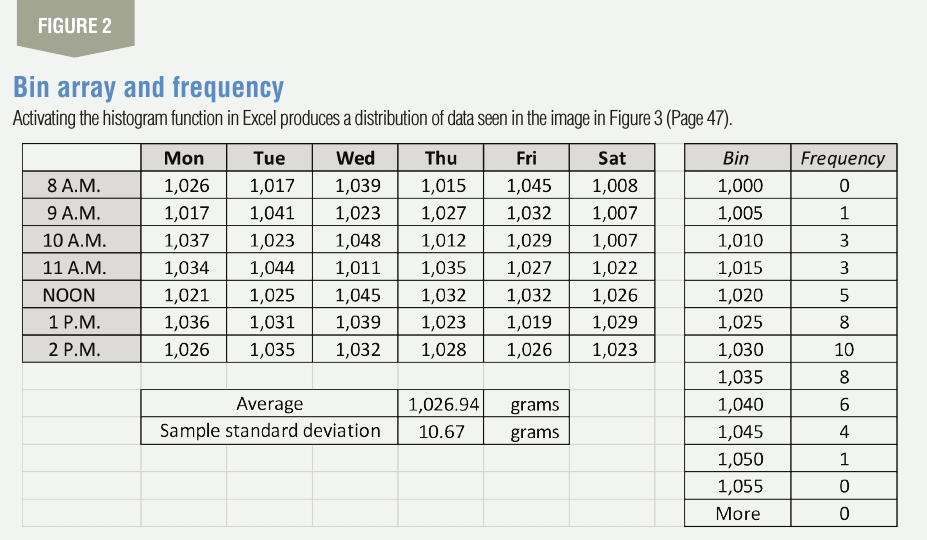 The bin array should begin with the minimum reading in the data set and end at the maximum reading or a little beyond. The creation of the bin array and the resulting frequency column after activating the histogram function is shown in Figure 2. Based on this data, using Excel we can calculate the mean for all 49 data points to be 1026.94 grams and the standard deviation (SD) to be 10.67 grams. We use the “average” and “STDEV.S” function in Excel to do this. 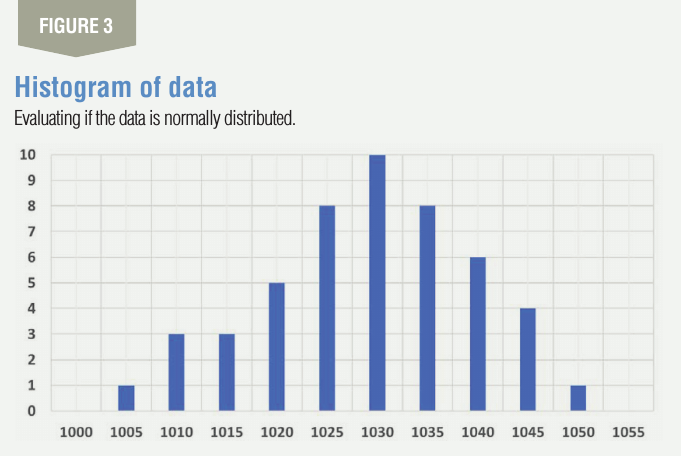 The frequency column is now plot-ted as a column chart to give you the histogram as shown in Figure 3. As can be seen from the histogram, that it is a normal-looking distribution, and hence it is OK for us to proceed further.

Using Excel, we can also use the correlation function under Data and Data Analysis to see if the data are normal or not by letting Excel calculate the R-square value if we are uncomfortable to conclude the data is normal by simply looking at the histogram. If the R-square value in the correlation function is greater than 0.8, we can safely conclude that the data are normal and proceed further. 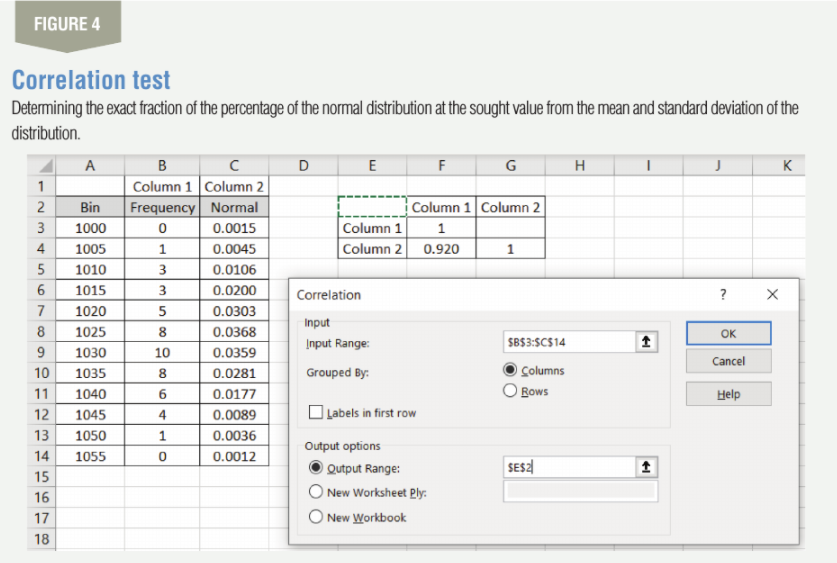 To do this, we create a column titled “normal” beside the frequency column as shown in Figure 4 and ﬁll it with data using the formula for NORM.DIST. This function gives you the exact fraction of the percentage of the normal distribution at the sought value if you put in the mean and the standard deviation of the distribution. For example, the formula that gets 0.0015 under Column 2 is NORM.DIST (X, Mean, Stdev, False) or NORM.DIST (1,000, 1026.94, 10.67, False).

Here we are ﬁnding the percentage of the distribution in the 1,000 bin. Another example, 0.0045 or 0.45% of the cereal boxes have an average weight of 1,005 grams, and so on. Once the Column 2 for the normal data is created, run the correlation function from Data and Data Analysis by putting in the input range and the output range as shown in Figure 4. The correlation coefﬁcient comes out to be 0.92 and, since it is above 0.8, we can safely assume the data to be normal. 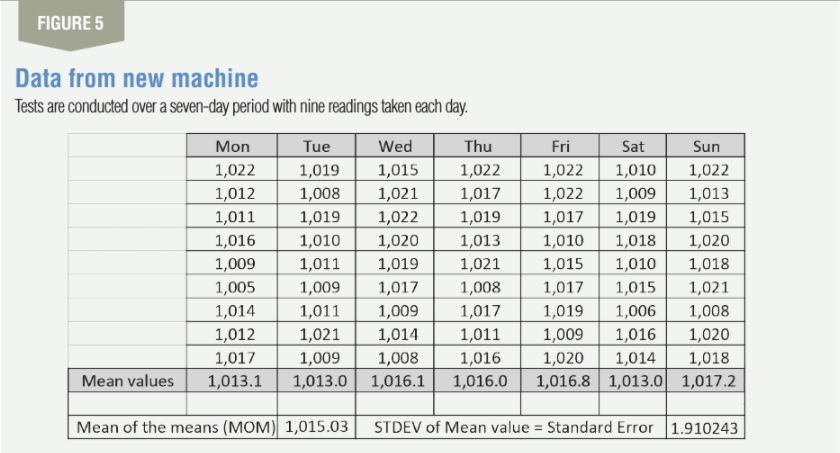 Comparing old to the new

Now let us compare this data to the new equipment manufacturer who claims that their machine has half the variation of the present machine. Conducting tests on the machine, the data shown in Figure 5 is collected over a seven-day period. Nine readings are taken each day; the sample size is nine. We choose a sample size which has a complete root for ease of further calculations. 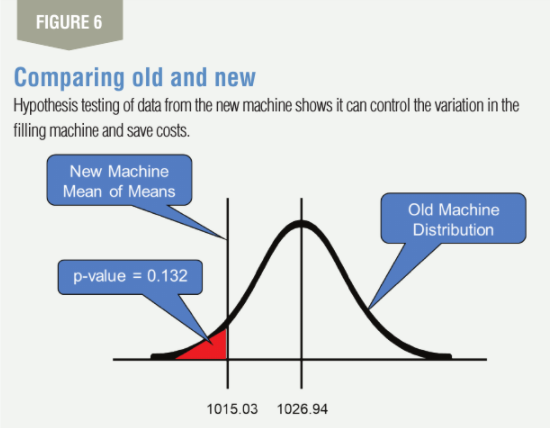 The original distribution has a mean of 1,026.94 and a SD of 10.67. We would now want to know whether the MOM can be assumed to be from the old population or not.

Engineers and technologists are taught a lot of statistics, but for evaluating equipment, basic statistical properties of the normal distribution can sufﬁce. Using the empirical rule of statistics and the central limit theorem, we can also conduct a test of hypothesis. The key is to ensure ﬁrst that the data is normal for us to proceed to applying the properties of the normal distribution.

Without using the CLT, the equipment manufacturer was claiming her equipment had half the variation of the old equipment might use the entire 63 readings, which taken as one sample will give us a mean of 1,015.03 grams and a standard deviation of 4.88, which she can claim is less than half (4.88 / 10.67 = 0.46) the original variation.

However, using the CLT, it gives us the true standard deviation of the new machine as 5.73 grams. Using the NORM.DIST function to calculate the area under the normal distribution also allows us estimate what percentage of the output will be outside the speciﬁcation levels.