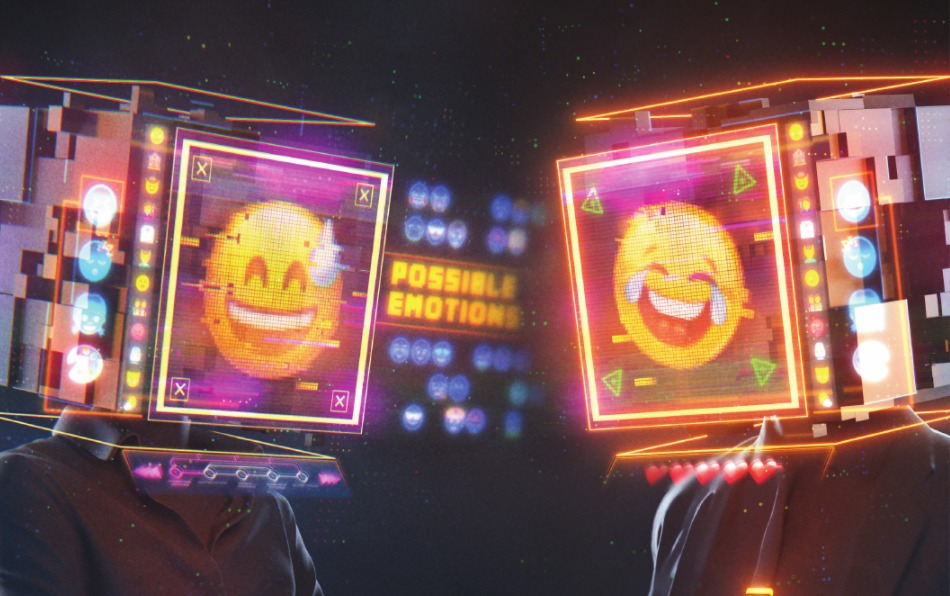 In the past several decades, the idea of interfacing the human brain and a computer, once only imagined in science ﬁction, has materialized via brain-computer interface (Brain–Computer Interfaces Handbook: Technological and Theoretical Advances, Chang S. Nam, Anton Nijholt and Fabien Lotte, 2018). 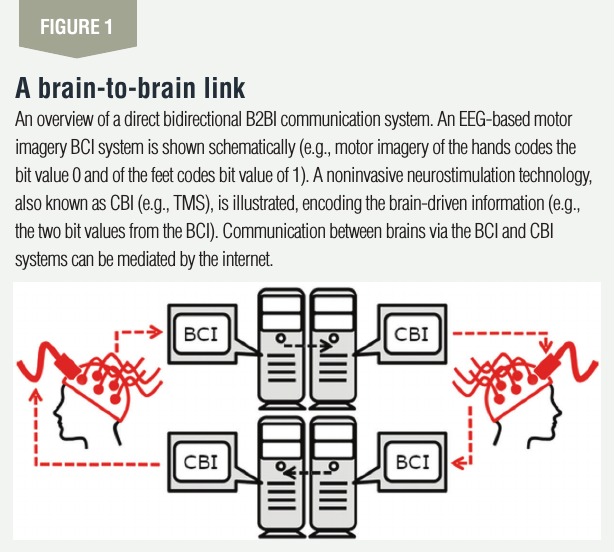 In general, B2BI combines a neuroimaging method, also known as BCI, and a neurostimulation method, also known as computer-brain interface (CBI), to exchange information between brains directly in neural code. A BCI (e.g., EEG-based motor-imagery BCI) reads a sender’s brain activity and then sends it to an interface, e.g., transcranial magnetic stimulation (TMS) that writes the delivered brain activity to a receiving brain.

However, it is also true that B2BI is still in its infancy and has a long way to go before any mainstream adoption. In this article, we review the state-of-the-art work, developments, limitations and challenges in B2BI research, which is also conducted in the Brain-Computer Interface and Neuroergonomics Lab at North Carolina State University. In particular, we point out that industrial and systems engineers need to be involved in developing and investigating this emerging neural interfacing technology to make sure we fully explore and correctly apply its potential (“Brain-to-Brain Communication Based on Wireless Technologies: Actual and Future Perspectives,” Dick Carrillo Melgarejo, Renan Moioli and Pedro Nardelli, 2019).

B2BI, at its logical extremes, could help rehabilitate stroke victims, enable mind-to-mind communication – a precursor to what eventually could resemble telepathy – and help people receive tasks best suited to their brain as they collaborate with others. B2BI could be used for brain rehabilitation of musculature control in stroke victims or brain tumor patients.

People who have had strokes or brain tumors removed often lose some cognitive ability, preventing their brain from producing certain patterns. Sometimes this is minor, like forgetting a word, but it can also cut out motor patterns that the brain uses to walk or grip things. B2BI could be used to help stimulate parts of the brain to send information to a stroke patient, who would move an arm or build strength in the neural pathways as they worked with their B2BI partner (“Secure Brain-to-Brain Communication With Edge Computing for Assisting Post-Stroke Paralyzed Patients,” Sreeja Rajesh, Varghese Paul, Varun G. Menon, Sunil Jacob and P. Vinod, 2020). This partner would send signals that would help the patient understand what moving a leg or arm should feel like and look like in the brain. Repeated use and neural stimulation would help the patient to relearn the motions he or she had before the stroke. This opens up a wide range of therapeutic options for the technology.

There are many possible uses for B2BI in the medical sector beyond only beneﬁting research. Speciﬁcally, it offers potential applications in communication, speciﬁcally in patients with neurological damage (“Ethical Issues in Neuroprosthetics,” Walter Glannon, 2016; “Brain-to-Brain Interfaces: When Reality Meets Science Fiction,” Nicolelis, 2014). Communication happens most in spoken or written form, which may not be possible or easy to use for stroke patients or patients of neurodegenerative diseases.

For example, people who have neurodegenerative diseases slowly lose the ability to talk and then ﬁnd it hard to type as the disease progresses. B2BI would allow them to communicate solely through the use of their brain, subverting any physical disabilities. The person with whom they are communicating would receive signals from the sender using a B2BI. The receiver or caretaker would not need to send any information back through neural networks to the sender since the caretaker can communicate by voice. This application of B2BI would only need a few improvements, such as making the technology more portable and speeding up rates of transmission, to be possible in the near future.

A more general application for B2BI in the future is to introduce new ways to deal with human factors engineering. B2BIs could be used for measuring fatigue, for timing breaks or for creating a more synchronous workforce. There have already been tests conducted where participants doing a task are given harder or easier tasks based on their cognitive states (“Increasing Human Performance by Sharing Cognitive Load Using Brain-To-Brain Interface, Vladimir A. Maksimenko, Alexander E. Hramov, Nikita S. Frolov, Annika Lüttjohann, Vladimir O. Nedaivozov, Vadim V. Grubov, Anastasia E. Runnova, Vladimir V. Makarov, Jürgen Kurths and Alexander N. Pisarchik, 2018). Electrical activity from two users’ brains as they performed the task allowed a computer, through B2BI, to assign the pair the task that would add the least fatigue to the group.

This cannot be done as effectively without a constant monitoring system as the feedback from the brain gives more direct feedback about the fatigue. The study included a pair of operators in which the more skilled operator got harder tasks and the less skilled operator got easier tasks. This would allow better timing for breaks as individuals would fatigue closer to the same rate. It would also allow the computer to monitor their fatigue levels for speciﬁc constrained tasks to ensure the best break times are identiﬁed and used. This could drastically improve the amount of time spent on breaks as they could be put in place when needed by the most workers for the time they need to recover or by allowing individualized breaks based on cognitive stress.

While this differs from a typical transmission of information from one brain to another, there is still a closed feedback loop connecting multiple subjects’ BCIs, and thus their brains. Other human optimization that could be done with B2BI is in synchronizing workers in a group of connected minds. In a factory where multiple people need to perform the same task at the same time, a sort of hive mind could allow them to act simultaneously even if they are out of sight or hearing (Pais-Vieira, et al., 2015). This could improve the efﬁciency and safety of many different operations where operators must work in tandem.

Currently B2BI is limited by clunky setups that make true back-and-forth communication very odd to set up. There are two different types of setups needed for each person – one to send information and another to receive it. However, these must each have a separate region of the brain to work on because current technology cannot easily read and write in the same area of the brain. The current setups to read and write are too bulky and target too much of the brain’s area to be able to easily set up both sending and receiving headsets on the same person.

The other main limit is the lack of detail in sending messages. Currently, participants in B2BI studies get binary signals sent to them, which they then interpret and to which they react. For example, a ﬂash of light in a pattern might mean to click a button and a “no” light means to wait. If people use morse code or other binary communication, it can be used to have more complex conversations but limits the accessibility to simple yes/no actions or similar applications.

Breakthroughs will come when the EEG headsets become easier to wear; neurostimulation technology advances – such as transductor arrays for focused ultrasonics stimulation (FUS) becoming more common, cheaper and easier to ﬁt into a helmet; data transfer rates go up; or when we can send and receive data in the brain using one technology (“Optimizing Computer–Brain Interface Parameters for Non-invasive Brain-to-Brain Interface,” John LaRocco and Dong-Guk Paeng, 2020). If the technology can be wireless, it will become more practical for all the ways discussed earlier (Melgarejo et al., 2019).

To overcome these limits, researchers need to create partnerships with medical professionals and programmers for both neurostimulation safety and artiﬁcial intelligence, respectively, allowing engineers who understand these systems to work closely with rehabilitation professionals who may one day use B2BI in the ﬁeld. Future research and funding may show us the beneﬁts of overcoming B2BI’s challenges, such as transmitting abstract thought or emotions, more adaptive two-way links between participants and higher data transfer rates (LaRocco & Paeng, 2020; Melgarejo et al., 2019).

All of the above are reasons that the ﬁeld of B2BI would welcome ISEs’ involvement. However, the beneﬁt to having ISEs design and test current brain to brain interfaces is that the future technology will better ﬁt the needs of their ﬁeld to improve productivity and satisfaction in the workforce they support. Industrial and systems engineers who get involved now will inform the direction that B2BI and BCI go as the ﬁeld develops.

The study of direct brain-to-brain interface is slowly fulﬁlling its potential to make waves in medical treatment, factory optimization and ISE as a whole. With the involvement of industrial and systems engineers, we will fully explore and apply this amazing potential and overcome the current limitations of the technology. As B2BI emerges, we need engineers to get involved; the more that research progresses, the sooner the technology can be used in supporting the rehabilitation of stroke victims, in analyzing and optimizing this new way of communicating and in helping to optimize task assignment based on cognitive states.