Sensors for Working Safely with Robots 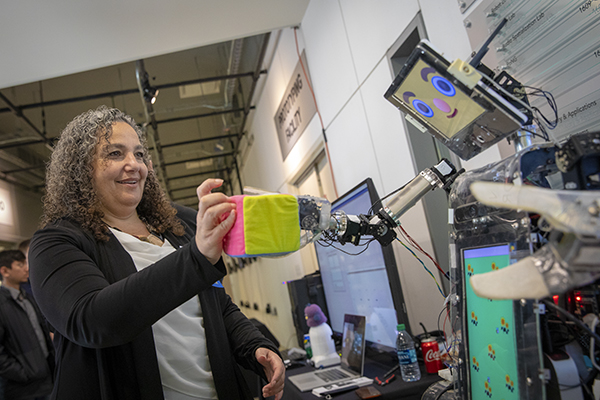 Traditionally, robots have worked alone inside safety cages or fences. But, more applications on assembly lines today require humans and machines to work in close proximity.

In some tasks, it is necessary for people and robots to share the same workspace at the same time. In these scenarios, the force, speed and movement paths of the robot must be restricted based on the degree of risk.

Among other things, that risk depends on the distance between the worker and the robot. That’s where sensors come into play. A wide variety of laser scanners, light beams, radar systems and other sensing technologies can help ensure safe interaction between people and robots.

“While power- and force-limited collaborative robots have attracted a lot of attention in the automation world over the last few years, there are still many traditional robots in use in factories around the world,” says Tom Knauer, industry manager for the Americas at Balluff Inc. “Many applications require six-axis robots that can move big, heavy parts quickly and accurately.

“But, engineers want to integrate collaborative features into older machines that can enable people to be close by and work near them,” Knauer points out. “That’s where we see growing interest in advanced sensors, such as 3D camera systems, solid-state laser scanners and radar scanners that go beyond light curtains or safety mats.

“Some manufacturers that have invested in new collaborative robots are acquiring laser scanners and other devices to create an additional layer of safety,” explains Knauer. “That enables them to run machines at full speed using the upper limits of force at times when an operator has stepped away from the safe zone.

“Closer human-robot interaction is leading to higher levels of productivity and collaboration that were unthinkable 10 years ago,” says Knauer. “The optimal solution for many applications in the future will be humans working together with robots, not robots taking jobs away from people.”

“We are seeing more demand today for sensors that enable robots and humans to work in close proximity,” adds Chris Scott, market product manager for industrial safety at SICK Inc. “The close and, at the same time, safe collaboration between humans and robots is a prerequisite for high productivity, increasing efficiency and improved ergonomics.

“[Safety sensors] provide people the ability to work in close proximity to robots, while at the same time reducing downtime in production,” explains Scott. “This is achieved with an adaptive perception of the environment with the aid of intelligent, rugged and reliable sensors and safety systems.”

Increased demand for flexible manufacturing is behind the trend toward human-robot collaboration. Engineers want to be able to quickly reconfigure their assembly lines for product changeovers, as well as support high-mix, low-volume production.

“Manufacturers are also moving toward large, centrally controlled production lines with multiple operations all being monitored by a single PLC and protected by a single safety controller,” explains Mason-Darnell. “With a centralized control and safety system, [engineers] can easily monitor, control and update [assembly lines] to support changing requirements.

“In the traditional model of functional safety, there is a defined, static hazard zone,” says Mason-Darnell. “The role of the safety [device] is to prevent workers from accessing that zone when the hazard is present, or to detect if the worker enters that zone, and then stop the hazardous motion.

“Over the last three years, there has been increasing demand for humans and robots to work more collaboratively by actively sharing the same space,” explains Mason-Darnell. “Not only does this increase overall efficiency by allowing both the worker and the robot to complete tasks in parallel in the same area, it also allows more flexibility in production. The robot can perform repeatable, common tasks and the [human] can tackle the variable tasks that may call for creative problem solving.

“With the rise of collaborative workspaces, the role of safety sensors has evolved as well,” notes Mason-Darnell. “Rather than define a fixed ‘no go’ area that is the hazard zone, manufacturers are looking for the ability to have an adaptive hazard zone that is updated based on the location and speed of both the robot and the worker.

“With this model, the safety sensor is still tasked with locating the worker,” says Mason-Darnell. “However, instead of using that data only to stop or start the robot, it is being combined with speed and payload information from the robot to define in real time the hazard zone, as well as define a safe path and speed of travel for the robot arm. The hazard zone is still a no-go area, but the operation of the robot is being changed to accommodate the safety of the worker while still enabling production.”

Increasing use of mobile robots, such as automated guided carts, is also forcing engineers to rethink how they deploy safety sensors on the plant floor.

“We see an increased need in safety with automated guided vehicles that move product within facilities,” says Dana Holmes, senior product marketing manager for sensors and safety at Banner Engineering Corp. “Sensors to provide direction and prevent collision are imperative to their success. It is more important now to make sure people are safe working side by side with those robots.”

Manufacturing engineers can choose a variety of innovative safety sensor products that enable humans to work in close proximity to robots on assembly lines.

For instance, in response to growing interest in Industry 4.0 technology, Banner Engineering has developed a communication protocol that helps users cut costs, simplify installation and troubleshooting, and prevent and reduce downtime. In-Series Diagnostics (ISD) allows engineers to connect up to 32 devices with one in-series connection and communicate directly with the most commonly used PLCs.

“Our SC10 hybrid safety controller has the ability to support two of these ISD chains, giving you 64 devices on your ISD network,” explains Holmes. “When a safety event occurs, the system receives an alert that includes information about which safety device tripped, making troubleshooting a breeze.

“In-Series Diagnostics also provides an array of additional data points for each device used, including a unique tag value, internal temperature, voltage, and more, along with device-specific details, such as the alignment and distance between a safety switch’s sensor and actuator,” says Holmes. “Additionally, the system sends warning alarms if devices are near to tripping so that issues can be addressed before your machine shuts down.”

Laser scanners are also becoming increasingly popular. The devices continuously scan an area to create a two-dimensional protected zone. They can be used for a variety of horizontal, vertical and mobile applications.

“We have standalone units, master and remote units that link up to four scanners, as well as scanners that have encoder inputs that can be read directly by the scanner to select the appropriate safety zone,” says Holmes. “They reduce cost and eliminate the need for functions typically required by additional hardware like a safety PLC.

“Laser scanners are ideal for up to 275 degrees of protection from a single unit and can solve complex applications, with up to 70 unique safety zone sets and three independent safety outputs,” Holmes points out.

Safety radar systems are also being used in some factories today. Leuze Electronic Inc. recently launched the LBK unit, which utilizes radar waves to determine movement of a worker and stop hazardous movement from a guarded area.

“The LBK is immune to environmental concerns, such as liquid, debris, dust, dirt and temperature, which is unique in a primarily optical sensor world of safety sensors,” claims Rod Karch, safety product specialist at Leuze. “The LBK is robust and uses radar waves to detect human movement.”

“The system can easily be expanded and customized to meet the specific needs of the application,” says Scott. “The sBot Speed systems include software, programming logic and robot manufacturer-specific documentation. This provides customers all the tools necessary to quickly get their safety systems up and running.”

Another new product aimed at improving human-robot collaboration is FreeMove from Veo Robotics Inc. The industrial robot safeguarding system, which uses advanced computer vision and 3D sensing technology, recently received safety certification from TÜV Rheinland and has been certified for compliance with ISO 13849 for PLd, Category 3. It works with a variety of robots from ABB, Fanuc, Kuka and Yaskawa.

“FreeMove makes it easier for the two most flexible resources in a factory—humans and robots—to work together by providing an easily-installed, complete safety [system] that can be quickly reconfigured as needs change,” says Patrick Sobalvarro, president and CEO of Veo Robotics. “Unlike light curtains and other electro-sensitive protective devices which depend on complex calculations and careful planning by engineers to know which conditions are safe and which are not, FreeMove’s sensors continuously monitor the entire workcell in 3D.

“Using this data, FreeMove knows what could be a human and what definitely isn’t; it understands the state of the robot; and it determines automatically and dynamically if that robot needs to slow or stop to keep those humans safe, and when it’s safe to resume operation,” explains Sobalvarro.

“FreeMove enables more flexible and efficient workcells by allowing the use of standard industrial robots in collaborative applications,” claims Sobalvarro. “[It] enables manufacturing engineers to safeguard both robot and nonrobot hazards, providing a comprehensive safety system that provides labor savings in the design and commissioning of complex workcells.

FreeMove is already in use in pilot installations at a variety of manufacturers in the aerospace, appliance, automotive, construction equipment, consumer goods and electronics industries. Applications include operator load stations, palletizing and parts presentation.

“Today, we need more humans in manufacturing than ever, because of increasing demand for customization, flexibility, variation, faster product cycles and quicker response to quality issues,” says Sobalvarro. “The best production environments in the future will be ones where there is [seamless] human-robot interaction.”