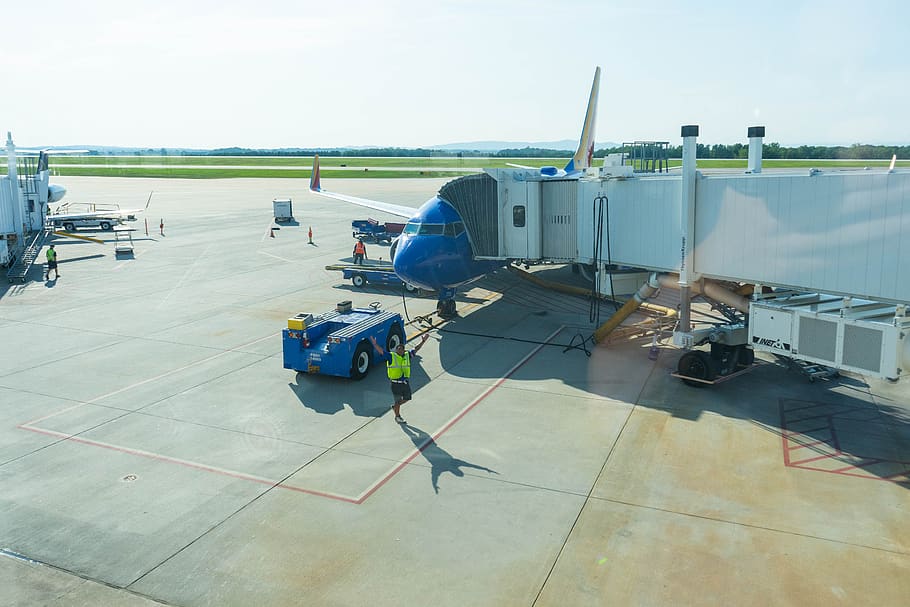 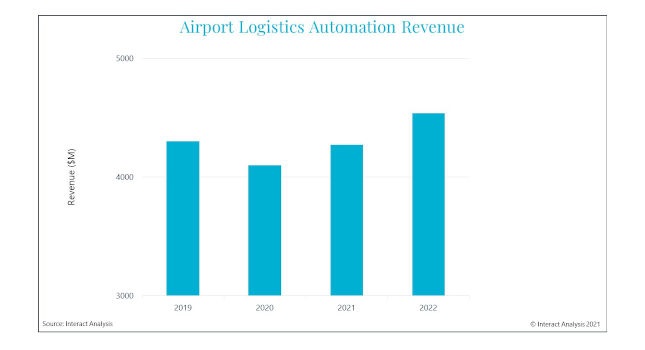 2020 was a disastrous year for the aviation industry. Airports became ghost towns during March and April and traffic remained low for the rest of the year, for reasons well known to all of us. Overall, global passenger numbers fell by about 60% (although in China the fall was only 40%; in some European countries, such as Italy, Spain, Germany and the UK, it was over 70%).

However, sales of automation equipment did not fall nearly as far in 2020, a report from Interact Analysis shows. The surprising finding from this research backed by a substantial amount of interview inputs from experts, and collected data, was that overall airport logistics automation sales only fell by 5% in 2020, from $4.3 billion in 2019 to $4.1 billion in 2021. There are various reasons for this, including:

It should be noted that the results have varied significantly by region and by company. Some of those that spoke to Interact Analysis reported very heavy double-digit declines, with even figures such as a 50% or 75% decline reported in some cases. However, these were suppliers with a small market share. The larger systems integrators who account for the majority of the revenue in baggage handling systems all saw similar revenue in 2020 vs 2019. In some cases, this may have been partly due to the ability to cope with reduced demand by bringing in-house components of a complete system that would previously have been subcontracted.

2021 will see a varied picture for logistics automation

Sales performance in 2021 has been and will be quite variable depending on the case. While some countries such as the US and UK are returning to normal and set for a strong finish to 2021, other parts of the world, including India and South America, have seen more serious COVID outbreaks in 2021 than they did in 2020, and as a result more serious effects on all sectors of the economy including aviation.

In some cases, we see companies that delayed projects in 2020 now moving forward in 2021. However, there are also cases where projects went ahead and were completed in 2020 due to existing contracts, leaving the airports with a very low budget situation that will persist into 2021 and beyond. Regardless of how much the aviation industry will rebound, airports cannot respond to this immediately if the finance is not available, or if confidence has suffered given the effects if the pandemic.

Overall, we currently forecast 4% growth for 2021 vs 2020 with significant variation by country (India and South America will be flat or decline, while China has the strongest growth forecast at 8%). However, just as we saw in 2020 there will be a big variation, with some companies seeing another revenue decline while others see double digit growth. Often this will be due to factors outside of companies’ control.

Our assumption is that passenger growth will not return to 2019 levels until 2023 or 2024, and on this point we are in agreement with other industry analysts and most of those we spoke to during the research for this report. However, as already seen in the case of 2020, the relationship between passenger numbers and airport logistics automation sales is quite weak. As cargo sales actually grow, and as more people realize the benefits of investment on software as well as hardware, there will be plenty of opportunities.

However, it is key to understand that the forecast that 2022 will be higher than 2019 is almost entirely based on forecast growth in China. Europe is expected to be slightly lower in automation revenue in 2022 than 2019. For the whole world excluding China, 2022 and 2019 have an almost identical forecast. The forecast of a higher 2022 is therefore dependent on the assumption that China continues to build new airports. 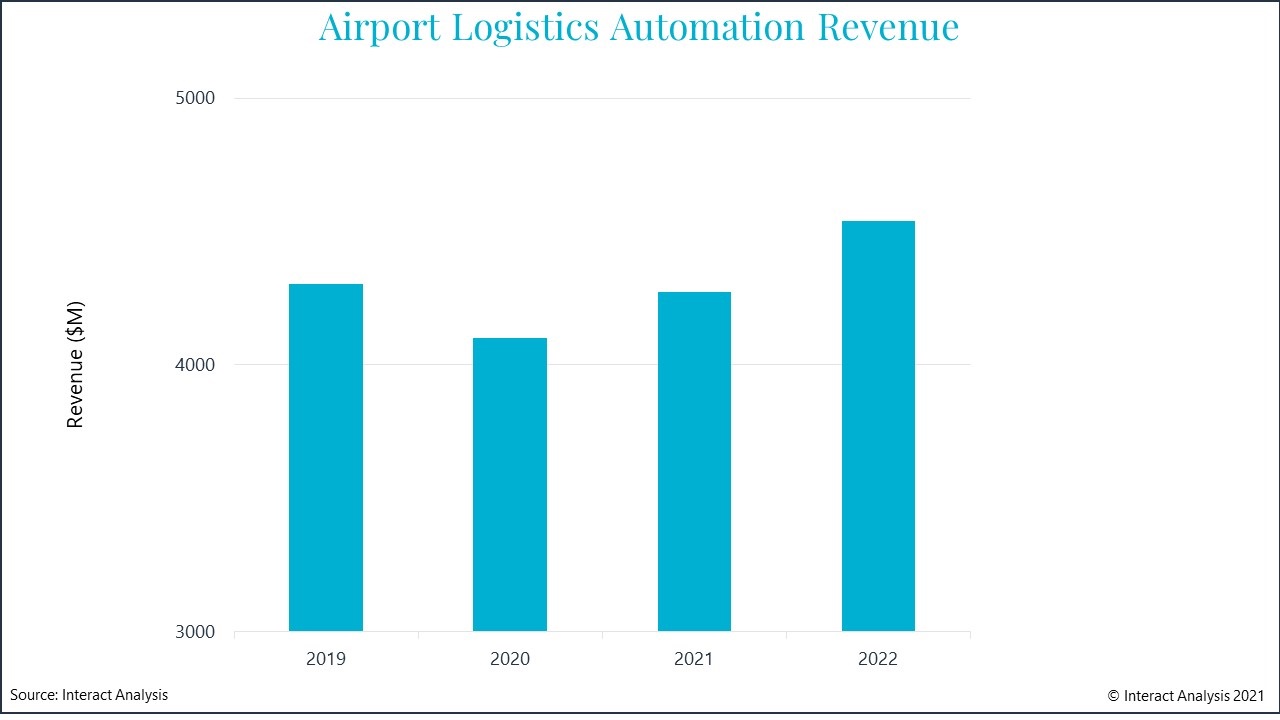 Growth drivers vary in each region

The era of construction of large, brand new airports has come to an end in Europe and possibly the US largely because the needed capacity is already there, and also because of environmental concerns. In Europe, any large new airport would likely meet with too much combined opposition from politicians, environmentalists and locals concerned about the effects on their area. However, Europe can still be expected to have substantial automation sales in capacity expansion and replacement of existing equipment. Europe is often a technological leader in this area and vendors will look to drive revenue growth by creating value even as passenger numbers struggle to see the kind of growth that is expected in other regions.

China is a different case. Smaller airports still use manual systems rather than automation, while modern large airports built in recent years don’t require as much upgrading of old equipment as might be expected in, say, the US. However, China is going to lead the world in new airport construction in the coming years with a significant portion of that business available to international suppliers.

Environmental concerns will have small impact

Increasingly, and understandably, more people are now choosing to fly less because of climate change. This trend has been most commonly recognized as the “flygskam” movement in Sweden. To a small extent, this trend has spread across Europe but barely at all elsewhere. Overall, it is assumed in the forecasts for this report that climate change concern is currently reducing flights by about 1%-2% a year and that this may increase to about 3% a year by 2025. It may be enough to decrease the growth rate per year of airport logistics automation by about 1%. may become a more significant factor after 2025, however Interact Analysis currently has no forecasts beyond that date.

In 2020 and 2021, the aviation industry, and the airport logistics automation market that serves it, has faced tremendous uncertainty and business performance that varied tremendously by region, by supplier and by segment. Assuming a normal economy, this should largely change in 2023, 2024 and 2025. By then, effects of the pandemic will have largely passed, budgets that were cut should return, and the market is likely to become less volatile. Given the tremendous effects of the pandemic on the industry, and to a much lesser extent environmental concerns, it does now seem that some of the bullish pre-2020 forecasts can be altogether discarded. Modest growth can still be expected however as airports look to improve their existing equipment and introduce newer technologies.