The Art of Manufacturing Grease 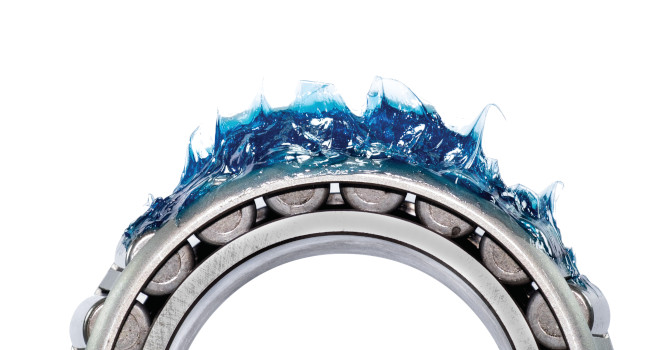 Choosing a grease for a particular application requires understanding how the grease will hold up under operating conditions, which can include variable pressures and temperatures. Identifying the right grease can be challenging as the grease manufacturing process has dramatic impacts on the properties of the final product, and parts of the process require experience to fully control.

Choosing a grease for a particular application requires understanding how the grease will hold up under operating conditions, which can include variable pressures and temperatures. Identifying the right grease can be challenging as the grease manufacturing process has dramatic impacts on the properties of the final product, and parts of the process require experience to fully control.

In addition, Evan Zabawski, senior technical advisor at TestOil, headquartered in Strongsville, Ohio, noted that rheology is the science of deformation and flow of materials. Most solids are considered elastic (i.e., a material that when stressed will store deformation energy and recoil to its original shape), while most liquids are considered viscous (i.e., a material that when stressed does not store deformation energy and will start to flow). In other words, Zabawski said that “greases are viscoelastic materials, a little of both…greases are thick when at rest, and thinner under the application of shear, so they are described as shear thinning.”

Greases used for lubrication consist primarily of a base oil, thickener, and performance additives.

Kumar noted that “greases made with synthetic oil (e.g., polyalphaolefin) are expected to possess better high and low temperature characteristics compared to greases made with mineral oils.”

How thickeners play a role

The thickener is what sets a grease apart from a fluid lubricant. The thickener is a molecule, polymer or solid that is typically partially soluble in the lubricating fluid and imparts a semi-solid consistency to the grease. Soaps can be grease thickeners, while non-soap thickeners include polyurea, organophilic clays (e.g., bentonite) and other materials. Thickeners may be fibrous, spherical or platelets, and have an impact on the final grease properties. The following properties are impacted by the chosen thickener:

A simple or conventional grease is prepared by reacting a single organic acid with one or more inorganic bases, while a complex thickener is prepared from two or more organic acids (e.g., a primary soap [metallic stearate] and a complexing agent [metallic salt]).3 The chosen agent modifies the grease characteristics and usually increases the dropping point, which is generally considered to be the temperature at which the thickener system fails, which helps to define the grease’s maximum service temperature.

Kumar said thickeners are usually “prepared in situ in a base oil involving a chemical reaction that can sometimes be highly sensitive to processing parameters like time, temperature, pressure/vacuum and agitation/mixing.”
Conventional lubricating greases are based on lithium, calcium, sodium, aluminum, barium, or their complexes.

According to a 2018 survey of worldwide grease production, 74.18%, by volume, contain lithium soap thickener.4 The type of thickener influences grease properties such as temperature resistance, which relates to viscosity, and water washout, which is the ability of the grease to still perform and remain intact when submerged in water. Kumar noted that greases based on calcium, calcium sulfonate and aluminum complex thickeners are expected to possess better water resistance characteristics compared to sodium-based thickeners. Clay thickeners have no defined melting point, so they have been used in high temperature applications.

Kay noted that “the thickener would certainly be considered by many to have the most influence since this component is key to establishing the grease’s basic capabilities and determining its application.” The thickener type determines the type of application where the grease can be used (e.g., high temperature, excessive water or moisture exposure, electrical device suitability, food-grade). For example, lithium cannot be used in a food-grade grease, but aluminum can be. Kay said that “some thickeners actually have inherent property advantages that avoid the need for specialty additives.”

Kay noted that additives are the second most influential component of a grease, as additives supplement desired properties not provided by the thickener and base oil. A goal of additives is improving grease performance in stressful operating conditions. Zabawski said that “a common additive is a viscosity modifier that modifies the base fluid’s properties to enhance performance in highly variable temperature additives.”

A wide range of materials can act as grease additives, depending on the final properties sought for the grease. Additives also can be solid materials, like graphite, to provide protection under heavy loads, or ceramic powder to protect in static high-pressure applications.

Greases can be manufactured using different processes like open kettle, closed kettle under pressure, autoclave/Stratco contractor process and continuous process. Kumar noted that “processing makes a considerable difference” in the end product’s properties and performance. For example, lithium greases made through the Stratco contractor process are popular and an industry standard, while open kettle lithium greases, made through continuous process units, are still efficient for producing large volumes.

Kay said manufacturing methods affect the properties of the finished grease, including oil separation, thermal properties, dropping point and even the reaction efficiency of the thickener components.

Richard L. Burkhalter, president of Covenant Engineering Services, LLC in Branson, Mo., noted that “most grease manufacturers utilize the open kettle process for making lubricating grease.” Some manufacturers use pressure reactors to create the thickener base, and then finish the grease product in open kettles. Burkhalter said that as lubricating greases are “a non-Newtonian, pseudo-plastic fluid,” the design of a grease manufacturing process contains many nuances. Some of these nuances have been well documented, but many others require experience to adequately address and control.

Zabawski said that after greases leave the reaction vessel, they typically go through a homogenizer or mill to break down the fibrous structure of the thickener—or to improve the dispersion of the base oil in the thickener. The amount of oil and the milling time needed depend on the consistency required of the final grease product.

Kay and Kumar noted the increasing demand for lithium for lithium batteries in electronics and electric vehicles has led to pressure on lithium prices and its potential availability for use in greases.5 Kay reported the cost of lithium in India recently rose six-fold in a short timeframe. This may lead to pressure on manufacturers either to make these greases more efficiently or to develop alternatives to lithium if costs continue to rise.

Kay considers the most dynamic component going forward to be the additives, as each specialty additive manufacturer seeks to improve their product lines.

Burkhalter noted the grease manufacturing process hasn’t changed much in the past 50 years, but recently work has been done to develop the use of microwave (MW) for heating the processing reactor.

This MW process is close to commercialization for the industry, in general, as it has the benefit of speeding up the manufacturing process and reducing energy costs, while also reducing required man hours. Burkhalter said process control is the area where major improvements are currently happening.

All of this information indicates that manufacturing of grease is an art that continues to evolve as end-user needs develop and the market refines its requirements.